Back in high school, I had no idea what I wanted to do or where I wanted to go for college. One thing I did know was that I wanted to study abroad. I ended up deciding on Lebanon Valley College, a small school in central Pennsylvania.

Highlights include standing on the bridge when the train goes by, walking by cornfields, and enjoying pretty skies over our beautiful campus. Despite the small size, my college has a lot of study abroad options. 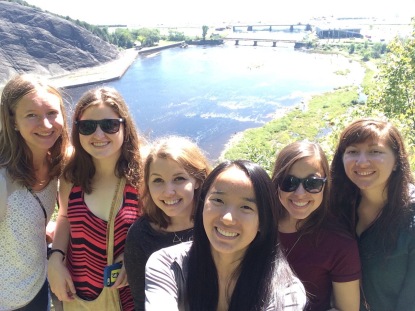 Before freshman orientation, five other girls and I traveled to Quebec for a 10-day French immersion program, but 10 days was not enough. When looking through my options, New Zealand instantly caught my attention. When else would I get the chance to spend four months on the other side of the world?

But why New Zealand? Why not Europe? Why cause my parents so much worry by being on the other side of the world? As a lover of outdoor adventure, New Zealand is the perfect place for me. Every time I hear about things to do in New Zealand, it’s something I want to experience; however, the 20+ hour plane ride makes it hard to justify only going for a few weeks on vacation. Another reason I chose New Zealand is because I am a Digital Communications major. New Zealand has a lot to offer in the tech and media industries, so I want to go there and see what it’s like if I decide I want to work there eventually.

Living abroad with other students is the best way to another country. Other programs through my college involve living in home-stays, but I wanted to experience dorm-life abroad. I chose the University of Waikato because my college has a program there which allows me meet five general education requirements. I’ve only taken three classes outside of my major at LVC so I’m looking forward to taking classes in new subjects such as environmental science and philosophy.

While abroad, I want to experience new things (as cliché as that sounds). I didn’t know anyone at LVC when I started, and New Zealand will be the same way….except I’m on the other side of the world, not and hour and a half from my house. This is both terrifying and exciting. I expect to meet people from all over the world, explore as much as possible, and get confused by the fact they drive on the left side of the road. Also, I have two roommates at LVC, but I’ll have a single room in New Zealand so that will be a big adjustment. I’ll probably get lonely at first, but that will just motivate me to make new friends as soon as possible.

I made this blog to document both my adventures in New Zealand, and the things I learn and experience abroad. Thanks for following along!

View all posts by mcalderwood4